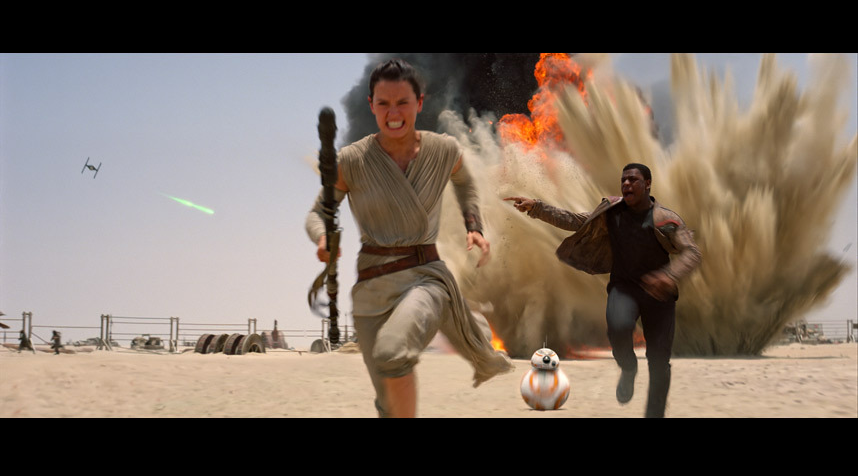 A long time ago, I tried to enter the Star Wars series. I started with Episode I: The Phantom Menace. I never found the willpower to watch it to the end credits, and after suffering through a number of disastrous podracing and Jar Jar sequences, it was cemented in my childhood that Star Wars was just a boring, overrated series of overwhelming CGI and horrible pacing.

I say this to emphasize not only how terrible Episode I is, but how fantastic a job J.J. Abrams has done in kicking off the new sequel trilogy with The Force Awakens — a film that succeeds with the characterization of Kylo Ren where prequel Anakin failed, and introduces a lovable new generation of ragtag heroes while bridging the gap between old and new. Though the new film follows the overarching structure of A New Hope closely, its new stars — Finn and Rey — are a breath of fresh air that feel incredibly genuine within the setting that they find themselves in. Played by relative unknowns John Boyega and Daisy Ridley, the chemistry and enthusiasm of these two actors are at the heart of why this film succeeds despite its lackluster plot, in the same vein that A New Hope was propelled by the classic banter and charisma of its cast.

The entire film is built around introductions: the introductions of Poe, a hotshot rebel fighter pilot; Finn, a stormtrooper who renounces his allegiance to the First Order; Rey, an orphaned scavenger who dreams beyond the stars and finds more than she bargained for; BB-8, a sassy successor to R2-D2; and Kylo Ren, a conflicted commander of the First Order whose characterization is colored by the history of the Sith lords, Jedi knights, and Rebel fighters that came before him. The film is also about re-introductions: of Han and Chewie, of Leia and C-3PO, of the Millennium Falcon and the lightsaber passed down from Anakin to Luke. Each of these introductions have their own weight, but the moments are carefully placed throughout the course of the film and allow the narrative to build the new generation of characters up while giving old Star Wars friends their due fanfare. For anyone familiar with the original trilogy (and who isn’t?), the clever re-introductions will have you smiling from ear to ear.

Centered around the passing of the torch is Harrison Ford, who at once is familiar in the role of Han Solo thirty years later while serving as a reminder of how things of changed since the heroics of the original trilogy. With him, of course, is Chewbacca, who has many charming scenes for the Wookie fan in all of us.

Any worries that one may have with the introduction of all of these new characters can be safely disregarded. The writers have done a fantastic job in billing Finn, Rey, and Kylo Ren as complex human beings in their own right — Finn is not a colored stormtrooper, nor is he an action hero or a fool, in the same vein that Rey is not just a strong female protagonist or a damsel in distress. These are characters that are clearly shaped by their own upbringings as well as by the events they experience over the course of the film. Although the “traditional” thing to do is to put the male and female lead together as a romantic interest, their relationship is really of two lonely individuals who slowly find someone they can both trust and care for: a friend. Small details, like when Finn gives Rey his jacket during an escape sequence, add up over time and really sell the growth of their friendship, so much so that it really wouldn’t irk me if they ended up together because of how genuinely close they are. The fact that nobody blinks an eye when Finn reveals that he’s not part of the Resistance is a sign of how maturely the human interactions are handled in this film.

A lot of comparisons are going to be made between Kylo Ren and Anakin Skywalker, but the new film certainly does a better job of portraying the struggle of a Force user lured towards the power of the dark side. Although I’m not entirely a fan of the heavy-handedness of Kylo’s characterization, I do appreciate their decision to make the main villain one that is neither all-powerful nor decisive. Kylo’s insecurities, from who he is to his failures as a Force user and as an apprentice to Supreme Leader Snoke, give him a lot of internal complexities and even serves to make him representative of the millennial struggle. It will be interesting to see where the next two films take his character, as I believe the arc of Kylo will end up being a more nuanced character examination of legacy and the millennial conflict than the prequel trilogy, which was much more politically-based.

There are a lot of nuances to the script that are not immediately obvious, but add a lot to the lore of the world and serve to explain some of the more miraculous events. Through Kylo’s brutish use of the Force, Rey learns how to utilize her own Force powers, turning Kylo into an unwitting mentor for the young hero; the fact that R2-D2 wakes up at the end of the film with the rest of the map can be explained through passing details from earlier in the film, when we learn that R2-D2 is in low-power mode (perhaps listening for signs to wake up), Luke is stationed at the first Jedi temple (explaining where they would have to be looking on old archive maps), and the First Order has the same piece of the map due to downloading the Empire’s old archives, which R2-D2 would have from his many interactions with Empire systems. It’s a great way to hit the required plot points while sneaking in informatory pieces for those looking for a little more explanation.

Beyond the writing of the film, the cinematography is absolutely gorgeous. Despite what anyone may say about Jakku as a planet, there are so many beautiful shots within the first forty minutes or so: shots of fallen star destroyers and AT-ATs blending naturally within their surrounding environment, long perspectives of Rey rappeling into the pits of a star destroyer and sledding down huge dunes, and awe-inspiring shots of Finn overlooking Niima Outpost. The shooting of the Millennium Falcon escape sequence is brilliantly dynamic and gives us a last farewell to the scenery we’ve become so familiar with, and the Falcon has a sense of weight and belonging in the world that is lost in some of the later action sequences involving X-Wing fighters. And let’s not forget the two crimson sun shots: a panning shot of Rey beaming through the desert, and an apocalyptic shot of approaching TIE fighters.</p>

Like I said, some of the later scenes don’t hold up as well, but they are beautiful in their own right. In one later action sequence, a long take involving Finn running on the ground, looking up at the airfight above him, and then panning back down to the action below struck me as illustrating both the wonder of The Force Awakens and the disappointment of its later sequences. The take is incredible in its depiction of two planes of battle and is backed by a beautiful surrounding environment, but it is absolutely impossible to take in everything that the film throws at you in one viewing. Later action loses some of its focus and takes you out of its world, reminding you that, in the end, you’re really just looking at a set piece.

There are other imperfections that are disappointing. The characterization of Leia, though perhaps realistic considering her prolonged position as General of the resistance, is missing her old attitude and energy. From sassy rebel to grizzled mom, her scenes serve only to make me wish for the good old days of hard-nosed leadership and snappy retorts. The pacing of the film is also disappointing once we’re finished with the re-introduction of Han and Chewie, and though the entire film is gorgeous and filled with quick-hitting humor, there is less time to appreciate the world that drew us in in the first place; the film knows the plot points it needs to hit and quickly shifts gears in preparation for the film’s equivalent of A New Hope’s final death star sequence, and it almost makes me wish to be back on the dunes of Jakku or listening to clever banter aboard the Millennium Falcon. One needs only to watch the Castle scene to understand how underutilized the whole setting was: from the uselessness and lack of development of Maz, to the fact that they barely indulge in the diversity of creatures lounging out in a giant castle watering-hole. Unlike Jakku, we never get to stop and smell the roses before the First Order blows it all up.

Some may also be disappointed by the new soundtrack associated with the movie. Although it serves as a huge part of the Star Wars experience and succeeds in being a fantastic accompaniment to the action on screen, none of the new score is truly memorable in the same tune of classics like The Imperial March, The Millennium Falcon, or Han Solo and the Princess. The closest piece will certainly be Rey’s Theme / The Scavenger, but to those looking for a new melody to hum, you may be out of luck.

In the end, The Force Awakens follows many of the same footsteps that A New Hope took almost forty years ago. While that may sound disappointing to those who have yet to watch it, rest assured that the film, especially the first forty minutes or so, is an incredible piece of cinema that treats each of its characters with respect, is filled with the same memorable banter and clever interactions that made the original trilogy a classic, and gives you a world filled with beautiful scenery, eclectic creatures, and the heart-thumping thrills that only a John Williams soundtrack can provide. This is the same Star Wars you know and love, paying homage to everything that came before it while imbuing its own personality along the way.