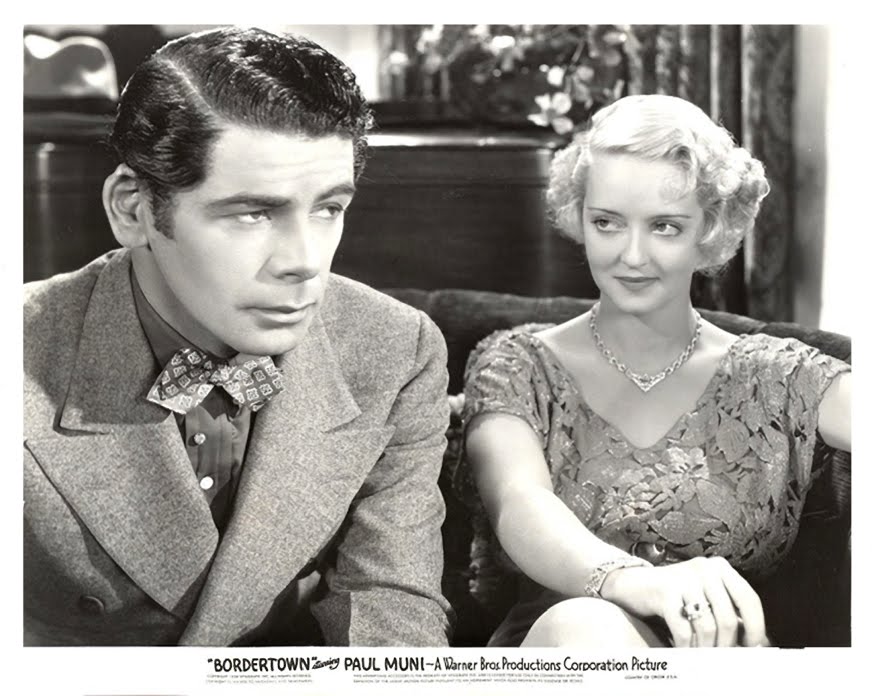 Bordertown is a great example of a film that starts off with an intriguing prologue, enters the main act strong, and then manages to lose its handle and go completely off-the-rails. The problem with Bordertown isn’t the fact that it centers around the rise of hot-blooded Mexican lawyer Johnny Ramirez, who is portrayed by the Jewish Paul Muni. In fact, Paul Muni is known for being able to disappear into his roles, and does a fairly good job here despite being a little over the top in his portrayal. The problem with Bordertown is that it tries to shock and astonish its viewers more often than necessary in the latter third of the film, putting on a heavy dose of melodrama that it never recovers from.

Bordertown is the story of a righteous Mexican lawyer who fights to achieve the American dream, and gets repeatedly trampled on despite his successes. The prologue is largely stereotypical of American opinions on Mexicans at the time, and the ending is ridiculously racist and depressing given the trajectory of the film up until that point, but Paul Muni manages to carry a good charismatic energy throughout the film that keeps things alive and interesting. Eugene Pallette provides an immense comedic spark early on as Charlie Roark, the oblivious husband and owner of a Tijuana road house, but the real star of the show is a young Bette Davis, who plays femme-fatale Marie Roark.

Bette Davis has the unique trait of seemingly being on or coming off of cocaine in every scene she’s in. This unique trait is what launches her into stardom at the end of the ’30s and into the ’40s, and its what makes her performance in Bordertown a remarkable one. In one iconic moment, she blows so much cigarette smoke out of her orifices that I expect somebody was running to pull the fire alarm afterwards. Her increasingly manic performance is sudden and unbelievable, but her raw acting chops are certainly on display here, and it was obvious to her future directors that she could be an icon given the right screenplay. Despite a less than perfect script, there is enough wit and charisma early on to prop Bordertown up as an enjoyable movie.