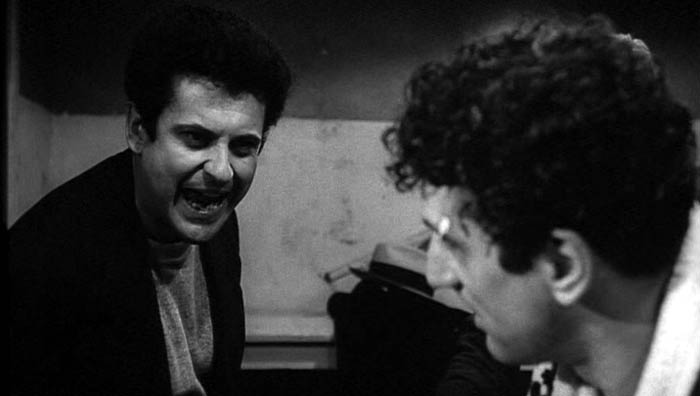 In 1980, Martin Scorsese released Raging Bull, a film depicting the life of middleweight boxer Jake La Motta. The screenplay took nearly 10 years to culminate, with Emmett Clary's first draft undergoing many drastic changes before being finalized into the shooting script used on set. One of the more interesting changes involved combining the roles of two characters, Pete Savage and Joey La Motta, into one — Jake's brother, best friend, and manager, Joey. With this new character came a new dynamic between the lead and supporting male protagonists, creating natural scenes of tempered emotions and destruction and resulting in the illumination and expansion of Jake La Motta into a multifaceted character.

Although Robert De Niro had always been driven with a desire to bring Raging Bull to the big screen, Scorsese had to undergo a life-threatening experience before realizing the true value of La Motta's story: its "primal emotions," as De Niro puts it. "No one could understand what the actor saw in the life story of Jake La Motta," 1 says Vanity Fair writer Richard Schickel, and it's easy to see why when reading through La Motta's autobiography, Raging Bull: My Story. Written in a stream-of-consciousness style with unlabeled chapters, long-winding paragraphs, and innumerable asides, it is understandably difficult to follow the narrative in any chronological order. The reader is bombarded with explanations and excuses for every action that Jake takes, such as the moment his brother Joey complains of being kept in the dark about Jake's $15,000 bet: "Well probably I should have told him. It's just that I was so used to doing things for myself that I didn't think of it" (153). 2

In Emmett Clary's first draft of Raging Bull's screenplay, the dialogue and story stay loyal to that of the book and of the general dramatic structure for studio films during the time. Pete plays the role of the soft-spoken, conventional foil to Jake's volatile personality, often talking with a hesitation indicated by multiple ellipses in his dialogue.

Pete is also there to play the reluctant friend dragged into bad situations, as evidenced on page 71 of the screenplay.

The role of Pete in Emmett Clary's draft is to paint Jake in the conventional light of a hotheaded boxer whose unwavering passion inside the ring leads to his own downfall outside of it — to give reasoning for his uncontrollable outbursts of anger in his personal life. "Everyone recalls it as quite conventionally chronological: boyhood, adolescence, triumphant and then defeated young manhood, and finally some sort of almost inarticulate redemption." Scorsese observes, "[they] explained that this guy did this because of that...but you can‘t explain any human being with one Freudian term." 1

Scorsese saw these explanations as extraneous and made it a priority to "boil the story down to raw emotions — to strip this story down to its primal elements, to reveal states of being, not states of mind." To that end, the role and actions of Pete are merged into the brotherhood character of Joey, though he retains the hardened personality and "Italian-American machismo" shared by his brother, Jake. After all, Scorsese says, "the controlling idea was never to step back and explain anyone‘s behavior; it was to plunge the audience into it, to make us feel, viscerally, every blow Jake La Motta delivered or absorbed in the ring and outside of it." 1

The addition of the new Joey La Motta, combined with the real life character of Pete Savage, allows the audience to have that same visceral experience with another character closely related to Jake. There are several scenes in the final script of Raging Bull where Joey exhibits an aggressive attitude reminiscent of what has been established as one of Jake‘s crucial characteristics, notably the scene in which he beats Salvy furiously in a paranoid rage. Another scene near the end of the script depicts Joey threatening to stab his child if he doesn't finish his plate, showing an aggressiveness that is present even in the comfort of his own household. However, Joey has none of the physique of his brother, and while Jake is the wild beast inside the ring, Joey deals with the politics outside of it, acting as manager to his brother. By giving the audience two characters that pack the same primal violent tendencies but have two differing duties, Scorsese manages to "emphasize that [Jake's] behavior is a product of a widespread ethos, not simply the malaise of a crazy boxer...The violence that constantly spills out of the boxing ring and into daily life gains credibility from Joey, who stands apart from the exceptional physicality embodied by the boxer." 4

The prevalence of this re-imagined Joey in the final script of Raging Bull takes the film in a new direction that focuses more on Jake's faults and failures than on his widely publicized triumphs. Joey participates in only one scene of Emmett Clary's screenplay — a scene that survives in the final script, but with shifted perspectives and a vastly different purpose. Originally, the argument over Jake's bet for the Janiro fight followed the dialogue from the autobiography very closely. "Joey was close to going out of his skull and screamed, 'Are you nuts? A hundred and fifty-five? What are you gonna do, cut off a leg? You must be outta your cotton-pickin' mind!' " Immediately following the scene, a newspaper excerpt is shown, exclaiming "JAKE DOES THE IMPOSSIBLE, MAKES 155, WHIPS JANIRO EASILY." Joey's subsequent reaction is nearly word for word with what is presented in the book: "I spent all morning on Jacob's Beach...you're the talk of the town! People can't get over what you did to Janiro!" Jake is presented as a hero figure who beat the odds with indomitable will and determination, but a quick glance at the final screenplay reveals a different story.

In the final screenplay, the two brothers' opinions on the bet are swapped, but more importantly, the argument is there only as a bridge for Vickie to awaken Jake's paranoia. Her complement to Jake's opponent, Janiro, prompts him to confide in Joey and ask him to look out for any suspicious behavior from Vickie, which eventually leads to Joey's pummeling of Salvy in the club. Jake's trust in his brother, coupled with their shared masculinity and propensity towards angry outbursts, leads to visceral scenes of destruction that could not have occurred as potently with Pete at the helm of main supporting character.

The scene's shift in intention is representative of the changes that took place in the script's ten years of construction, as the aspect of victory over Jake's opponents is almost completely overshadowed by his failures in his personal life to keep the people who love him from distancing themselves. Kasia Boddy touches on this exact subject in his book Boxing: A Cultural History: "...the championship fight [with Marcel Cerdan] is over in minutes and the next scene jumps ahead a year to present an overweight La Motta at home, eating a hero sandwich as he tries to get the tv to work." 3 This tv scene is absent in the original script, but it is the catalyst that propels the rest of the final script forward. With Jake interrogating Joey about his true intentions for beating Salvy, Joey does his best to defend himself and dares his brother to "kill everybody...kill Salvy, kill Vickie, kill Tommy Como, kill me where you're at it. What do I care?" His aggressive stance leads Jake to paranoia, as Jake accuses him of sleeping with Vickie and immediately confronts his wife in the next scene. Joey's aggressiveness in trying to talk sense into his brother fails, and it leads to an adrenaline-filled sequence of scenes that ends in the fallout of the two brothers.

Without Pete, there is one less character to worry about, and the character that remains to fill the void of best friend gone astray is none other than Jake's brother himself — the only family that Jake is shown to have, making potent the second to last scene of Raging Bull's final script. In it, Jake tries to apologize to his brother and hug him, only to be met with the cold shoulder. It leaves the reader feeling like Jake has been disowned, as if he is no longer welcome as family and must now fend for himself. "The agony of the boxer...is a fundamental element," notes writer Leger Grindon 5, and with Jake's best friend now also his brother, the agony of each argument and broken thread is magnified twofold as he alienates not only his friends, but his family as well.

On the subject of male submission and homosexuality in Raging Bull, there are many modern debates. In Leighton Grist's Masculinty, Violence, Resistance paper 6, Grist suggests that Jake needs Joey to punch him repeatedly in the face during the beginning kitchen scene as a means of punishment for the boxer's actions towards his wife, Irma. I disagree with this notion; although Jake finds comfort and ease when he is with his brother, he does not need Joey to discipline him — Joey is equally as violent and abrasive as Jake, and this is shown when he exclaims to "kill the b****!" as the brothers leave Irma to go clubbing. Grist also suggests there may be homosexual undertones between Jake and Joey, but it is much more apparent in the original draft with regards to Jake and Pete. There are many more intimate conversations between the two leading males in Clary‘s first draft, including this excerpt where Jake is doubting his abilities:

CLOSE - JAKE AND PETE
Jake sits beside Pete, glances at him and stares at the floor.
Pete studies him curiously and Jake finally blurts out --

JAKE
I keep getting the feeling I'm running
out of time ... like all of a sudden something
bad was gonna happen to me. I keep feeling
like I'll never be champ ... like ... like I don't
deserve it.


JAKE
Yeah ... and it got worse! You're the only
one I'd say this to. It was the second time
it happened to me, but this time, it was nutty!
Remember the Reeves fight? My first important
ten-rounder ... I ...

Clearly, there is a tendency for Pete to submit to his best friend, Jake, and this leads to quiet, personal reflections on their worries and feelings that seem homosexual in tone. Although scenes of doubt still exist in the final draft, Joey does not serve to complacently agree with Jake; rather, he is there to push Jake harder and be satisfied with who he is and what he can do. In one of the first scenes of the final draft, Joey tells his brother to stop worrying about his inability to fight the heavyweight champion, who is in a different weight class; Joey is also there to make the bet on Jake's weight for the Janiro fight, and is able to convince Jake that it is a win-win situation whether he succeeds or not. The movement from Pete to Joey shifts the film‘s focus from potentially submissive homosexual undertones to aggressive brotherly motivation.

The emergence of Joey as the primary supporting character over Jake's best friend, Pete, was an ultimately beneficial move by Scorsese and De Niro that helped make Raging Bull one of Scorsese's biggest masterpieces. The transformation from a thinking man's tale of redemption to a raw, primal showing of visceral machismo and emotion from both leading males gives the audience a different view of what makes Jake act as violently as he does. Joey's aggression when talking to his brother allows the script to turn naturally to scenes of destruction, such as the beating of Joey and Vickie, which in turn emphasizes Jake's faults and failures over his triumphs in the ring. The boxer's agony is now on center stage, and with his best friend and only family amalgamated into the character of Joey, the unresolved disconnection between the two gives Jake intense pain and a hanging thread where once the heroic redemption story stood.